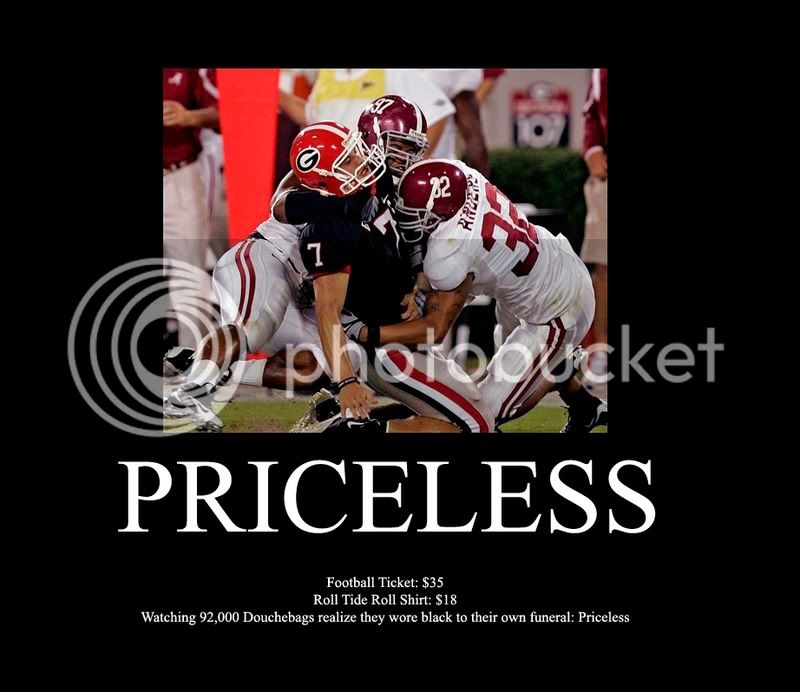 I received this in an email this morning and thought it was great and wanted to share it. Enjoy!

Looks like the Bulldogs were going to a funeral!!!

It was announced today that FEMA has offered Philip Fulmer a position there. A spokesperson for FEMA stated that Fulmer was offered the position after witnessing how he could evacuate 100,000 people from a crowded facility in a fast, calm, and orderly manner on Saturday, September 20th, 2008.

With apologies to David Letterman...


10. Welcome aboard Stan Drayton! The kickoff and punt return teams seem to be legitimately improved over a year ago.

9. The defense had a 33 point improvement on points allowed vs. last year!

8. For the second consecutive week there were zero camera shots of Dave Clawson looking like a deer caught in the headlights... with food poisoning.

7. Umm… we’re right where we were this time last season, right?

5. Progress II: Arian Foster had nothing to do with either of the devastating, momentum-shifting, game changing, soul-crushing fumbles this week. Thanks Montario! Thanks Jon!

4. Concerned about the impact the cost of fuel and the rapidly-expanding Financial Market crisis may be having on Vol fans, Fulmer has apparently decided to spare everyone the travel expenses associated with going to a bowl game.

3. The blue-chip recruits on campus for official visits this weekend were impressed with the coaching staff, direction of the program, and all the new facilities. Of course these were all Basketball recruits, but they were impressed none the less.

2. Basketball season is less than 2 months away.

1. Projected popcorn sales for the coming weeks have caught Mike Hamilton’s attention. We all know what happens when Mike’s not happy with popcorn sales…

I have two extra tickets to BAMA vs Arkansas in Fayeteville on the 20th!!

I've made two videos to get pumped for the new season.

They are HERE at

Two videos I made this weekend to get you pumped for this season.

The first is to the song '(Mama Said) Knock You Out' by LL Cool J.

The second has the 'Alabama Crimson Tide Rap' by Awol and Pat.

It's a great weekend when BAMA rolls over a top 10 team and poor feable UCLA who didn't have a chance put Fat Phil on the road a loser on his Birthday!

She's hot but she's a butt load of trouble! That mix just don't quite mix but best of luck to them anyway!
Collapse