If you're local (in Nashville area) I'll bring them to you! Or YOU pay the shipping for Fedex overnight!

You know how to keep Vols and Auburn fans from voting for OBAMA?

When was the last time BAMA was is the top 25 in recruiting...much less the #1 recruiting class in the nation according to rivals.com?

Awesome job by Nick and staff.....maybe they'll all come through and get us where we want to be!!!!

Roll Tide on the off season!

I guess I can't really blame Saban for it all. The way I see it!

We need an offensive coordinator.....a 25 year old doesn't have enough experience to be top notch anything in the professional world.

We desperately need a quarterback.

And ALL of our players need a class in STUPIDITY...hopefully to learn how NOT to be Stupid!

I don't understand how we looked SOOOOO good in beating the SEC East Champs and looked really good against the SEC West Champs and went straight to hell after that!

That's 6 Iron Bowls in a row and Auburn should not have beaten us this year, even though I knew before the game started that we would lose.

we lack a lot but I'd think we be able to put together a better team than this.

We don't even deserve a bowl.

Maybe Saban can put together a real coaching staff on the off season and maybe he can find some talent for this NO talent team. So for about the 8th year in a row I can say we have had yet another dissapointing season.

Thanks for the great players Shula!

Fill out this survey so we in the community can get to know you better:
Name (first only): Katy
How long have you been an Alabama fan? I've always been a Penn State fan, but I routed for Bama over Auburn since I was a kid. I became a full fledged Alabama fan when I finally moved to Alabama in 2003.
Which Bama team is your favorite (if you have one)?
What is your favorite play in Bama history?
Who is your favorite Alabama coach? I think Saban has definite potential, but you have to love the Bear!
Why do you love Alabama football? The thrill and the atmosphere and the ups and downs, and the tradition. Honestly, it's the same thrill of Penn State, but of course Bama just tops!

if you have not seen this poll by espn, check it out.  bear is on the list.

..we paid 4 million dollars for the same result as last season!!! It was cheaper with Shula. I know, I know, He needs to get his recruits in and I really like Saban..it's just very disappointing to lose one like this...we played tremendously well against Tennessee and I was proud of our boys against LSU..then..what happened? Next week ain't gonna be pretty!
Author of Rammer Jammer Yellow Hammer
Warren St. John
Appearing at Pelham Library this Sunday at 2pm

This event is FREE. Tailgating-style food will be served and signed copies of
Rammer Jammer Yellow Hammer
will be available for purchase.

FYI, I requested some Bama football icons at

dupontdesigns and they're here, if anyone else is interested.

Wow... Alabama hasn't played a game like that since the 2005 Florida massacre. The big story of this game was Saban's coaching to win the game right from the start. He had the balls to open with an onside kick that shocked us all. I was scared out of my mind in the 1st quarter when Ainge looked like he was going to shred us to pieces. Still, I have to have it to the team. Our offense, especially the passing game, played LIGHTS OUT. D.J. Hall set the school record for catches, and he just had an overall monster day. John Parker Wilson probably played the best game of his career as well, and our offensive line protected him pretty much all day (Even with multiple linemen out due to suspensions). Our defense played over their heads and really shut down Ainge in the 2nd half. Kareem Jackson, a freshman defensive back, earned player of the game honors in my book with two critical interceptions and some key pass breakups. I could talk about this one all day, but I just want to savor the win. You don't know how sweet it is to put a beat down like this on Tennessee. The victory cigars were firing up all over the Quad... I love it!

Just to rub things in... 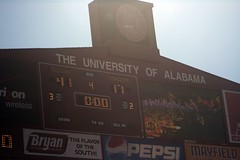